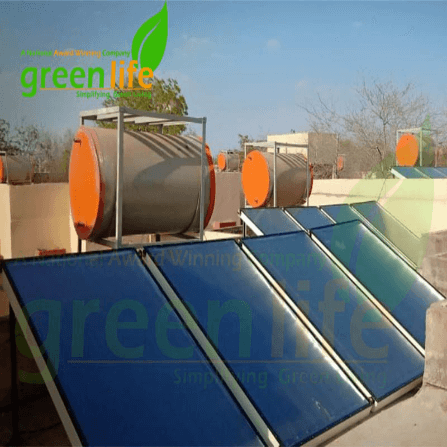 Flat plate collectors, developed by Hottel and Whillier in the 1950s, are the most common type. 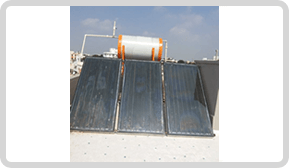 The absorber consists of a thin absorber sheet (of thermally stable polymers, aluminum, steel or copper, to which a matte black or selective coating is applied) often backed by a grid or coil of fluid tubing placed in an insulated casing with a glass or polycarbonate cover. In water heat panels, fluid is usually circulated through tubing to transfer heat from the absorber to an insulated water tank.

This may be achieved directly or through a heat exchanger. Most air heat fabricators and some water heat manufacturers have a completely flooded absorber consisting of two sheets of metal which the fluid passes between. Because the heat exchange area is greater they may be marginally more efficient than traditional absorbers.

As an alternative to metal collectors, new polymer flat plate collectors are now being produced in Europe. These may be wholly polymer, or they may include metal plates in front of freeze-tolerant water channels made of silicone rubber. Polymers, being flexible and therefore freeze-tolerant, are able to contain plain water instead of antifreeze, so that they may be plumbed directly into existing water tanks instead of needing to use heat exchangers which lower efficiency. By dispensing with a heat exchanger in these flat plate panels, temperatures need not be quite so high for the circulation system to be switched on, so such direct circulation panels, whether polymer or otherwise, can be more efficient, particularly at low light levels.

In areas where freezing is a possibility, freeze-tolerance (the capability to freeze repeatedly without cracking) can be delivered by the use of flexible polymers. Silicone rubber pipes have been used for this purpose in UK since 1999. Conventional metal collectors are vulnerable to damage from freezing, so if they are water filled they must be carefully plumbed so they completely drain down using gravity before freezing is expected, so that they do not crack. Many metal collectors are installed as part of a sealed heat exchanger system. Rather than having the potable water flow directly through the collectors, a mixture of water and antifreeze such as propylene glycol (which is used in the food industry) is used as a heat exchange fluid to protect against freeze damage down to a locally determined risk temperature that depends on the proportion of propylene glycol in the mixture. The use of glycol lowers the water's heat carrying capacity marginally, while the addition of an extra heat exchanger may lower system performance at low light levels.